295. Of puffins and inner piece

Sitting on Hog Island overlooking Muscongus Bay off the coast of Bremen, Maine, an American goldfinch sang beautifully as I was rereading Henry David Thoreau’s epic novel, “Walden Pond.” For the soul, the combination was almost unfair.

Thanks to a scholarship from the Black River Audubon Society, I spent a week attending the Audubon Field Ornithology Camp, which is home to the Puffin Project. We rose at dawn, usually around 4:30 a.m., and slept with the sun, just before 9 p.m.

There was no television and no radio, which also meant no politics, not a single mention the entire week (except in reference to the administration’s attack on the Migratory Bird Treaty Act), and no other social nuisances like LeBron James’ free agency. It was bird lovers coming together to share nature — to learn about the evolution and ecology of birds, share conversations about their behaviors, and see them in their natural habitats. It also included difficult looks at the impact of humans on the planet and avian environments, as well as our role in protecting some species over others.

The week included field trips to local parks and reservations, educational workshops, healthy “family style” meals (you know, the kind that includes engaging conversation), and programs presented by acclaimed scientists and writers from across the country on bird ecology. It also included boat trips throughout Muscongus Bay, an area rich with small islands and home to many shorebird habitats.

The highlight of the camp was the trip to Eastern Egg Rock, home of Atlantic puffins. I could barely control my excitement as our boat approached. Not usually fond of boats (and generally terrified of open waters), the three- to five-foot waves and rocking of our boat could not diffuse my enthusiasm. I battled my fear and balance to get a look at the puffins and other birds, such as black guillemots, terns, razorbills, double-crested cormorants, and gulls. I even got a few photos. 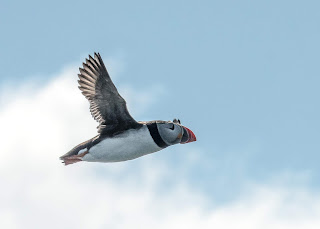 To do this took ingenuity and patience (puffins only lay one egg per year) but the success not only restored puffin populations to the coast of Maine, it became a model for restoring other bird populations across the world.

“Between 1973 and 1986, 954 young puffins were transplanted from Great Island to Eastern Egg Rock and 914 of these successfully fledged. Transplanted puffins began returning to Eastern Egg Rock in June of 1977. To lure them ashore and encourage the birds to explore nesting habitat, wooden puffin decoys were positioned atop large boulders. These were readily visited by the curious young birds, which often sat with the models and pecked at their stiff wooden beaks. The number of young puffins slowly increased. In 1981, four pairs nested beneath boulders at the edge of the island. The colony has since increased to 150 pairs.”

The project has not only been successful for the puffins, it has led to research opportunities for young scientists. Each summer about 15 interns live on the recluse island, spending quiet days in blinds and reporting on puffin and other bird activity.

While I fell in love with the success of the puffin project, we quickly learned that each species has its own story — both successes and challenges. Populations are often fragile and can quickly change due to factors such as predation, environmental changes (warmer water, for example), available food, and availability of habitats. Nature is difficult and many stories are difficult to hear.

Thoreau’s book is based on his time living in a small self-built cabin near Walden Pond, which he committed to live as simply as possible as a way to understand life. “I went to the woods because I wished to live deliberately, to front only the essential facts of life, and see if I could not learn what it had to teach, and not, when I came to die, discover that I had not lived.”

I also reflect that too many people are going to miss “the good stuff” in life. The good stuff, in my opinion, is experiencing life — not only in practice, but also in emotion, thought, and understanding. The “bad stuff” is the restless pursuit of money and the practice of greed and materialism. It is living the “scripted life,” doing that of which is expected, only to wake up one day, old and unfulfilled.

Thoreau wrote, “Do not trouble yourself much to get new things, whether clothes or friends. Turn the old; return to them. Things do not change; we change. Sell your clothes and keep your thought … Superfluous wealth can buy superfluities only. Money is not required to buy one necessary of the soul.”

Maybe we need to return to calm and peace of nature. Spend more time enjoying the views of lakes, the soothing motion of waves, the swaying of trees, and the songs of birds. A place of tranquility, alone comfortably alone with our just thoughts and appreciation of the natural world around us.

A place that money can’t buy.
Posted by Rob Swindell at 7:33 AM

295. Of puffins and inner piece

Sitting on Hog Island overlooking Muscongus Bay off the coast of Bremen, Maine, an American goldfinch sang beautifully as I was rereading He...

"His fans call him a brilliant crusader for the truth, while critics have accused him of being elitist and anti-establishment..."
-- Amherst News-Times